The “feral” value of forests vs. the services they provide to humans

When thinking about ecosystems in our planet (terrestrial, aerial or aquatic), forests no doubt represent some of the most evolved and complex ones. It has been estimated that approximately 80% of the earth’s biodiversity may be found in forests, even if currently they only occupy less than 30% of the earth’s emerged land. Forests are also included among the most productive ecosystems in the world, capable of harnessing the sun’s energy in an unparalleled way, while maintaining the ability to recycle nutrients necessary for all life on the planet. Trees figure as the largest and oldest organisms known to man: California coastal redwoods (Sequoia sempervirens) can be over 100 m tall, and individual California bristlecone pines (Pinus aristata) can be over 5000 years old. Forests appeared 107 years ago and thus existed millions of years before the first animals roamed the earth, and will likely exist after humans will be gone. Although the Anthropocene (i.e. the age of man since the Industrial Revolution) has left an indelible scar on forests, due to human activities dramatically decreasing forest area and changing forest structure and composition, it is imperative we think of forests as “self-willed” grandiose ecosystems. Forests are true worlds within our planet: not only do they harbor an unimaginably rich community of plants, animals and microbes, but each of them is capable of setting in motion complex processes capable of changing the world’s atmosphere and climate, of regulating the water balance at the continental or regional level, and of maintaining the fertility and productivity of earth’s soil. All of these processes occur in the absence or in the presence of humans, hence it has recently been proposed to regard forests not for what they provide humans with, but for their role at the planetary level independent of humans.

“In the concept of ferality, each ecosystem possesses the same intrinsic value when left alone due to the spontaneity of functional processes, even if human activities have eliminated plants or animals considered prestigious.”

Director at the Forest Pathology and Mycology Lab in Berkeley and adjunct professor at the Environmental Science, Policy and Management Department of the University of California.

A call from...
Matteo Garbelotto

Director at the Forest Pathology and Mycology Lab in Berkeley and adjunct professor at the Environmental Science, Policy and Management Department of the University of California. 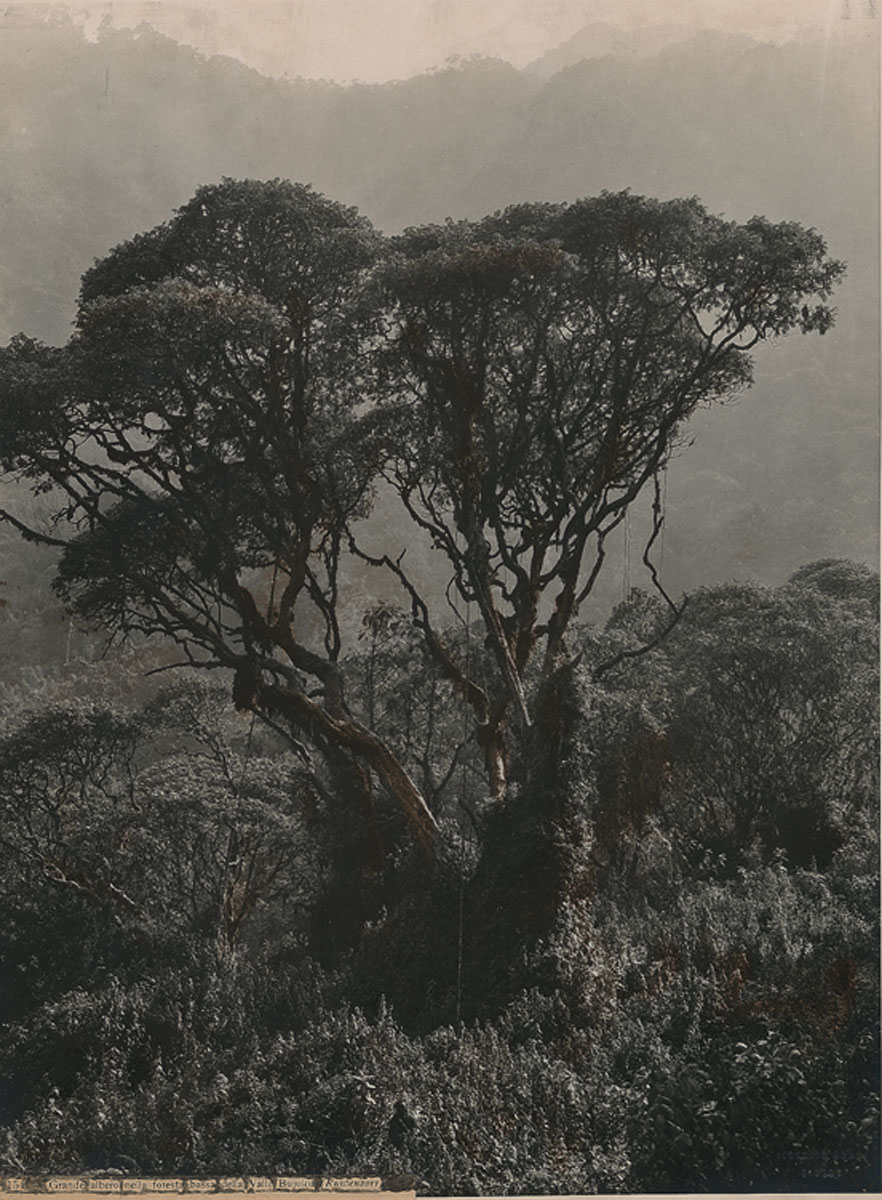 In 1906, Luigi Amedeo, Duke of the Abruzzi, conquered the highest peaks of the Lunaes Montes, the vast Ruwenzori massif in the region of the Great African Lakes, on the border between Uganda and today’s Democratic Republic of the Congo. As a member of the expedition, Vittorio Sella was particularly focused on photographing the indigenous people, without neglecting to point his lens toward the dense, plant-based ecosystem that flourished there, bursting with primordial charm. Impressive trees, resembling gigantic candelabra, emerge from forests of dense and contorted heather, blending in with an undergrowth full of spongy moss and pendulous lichen. 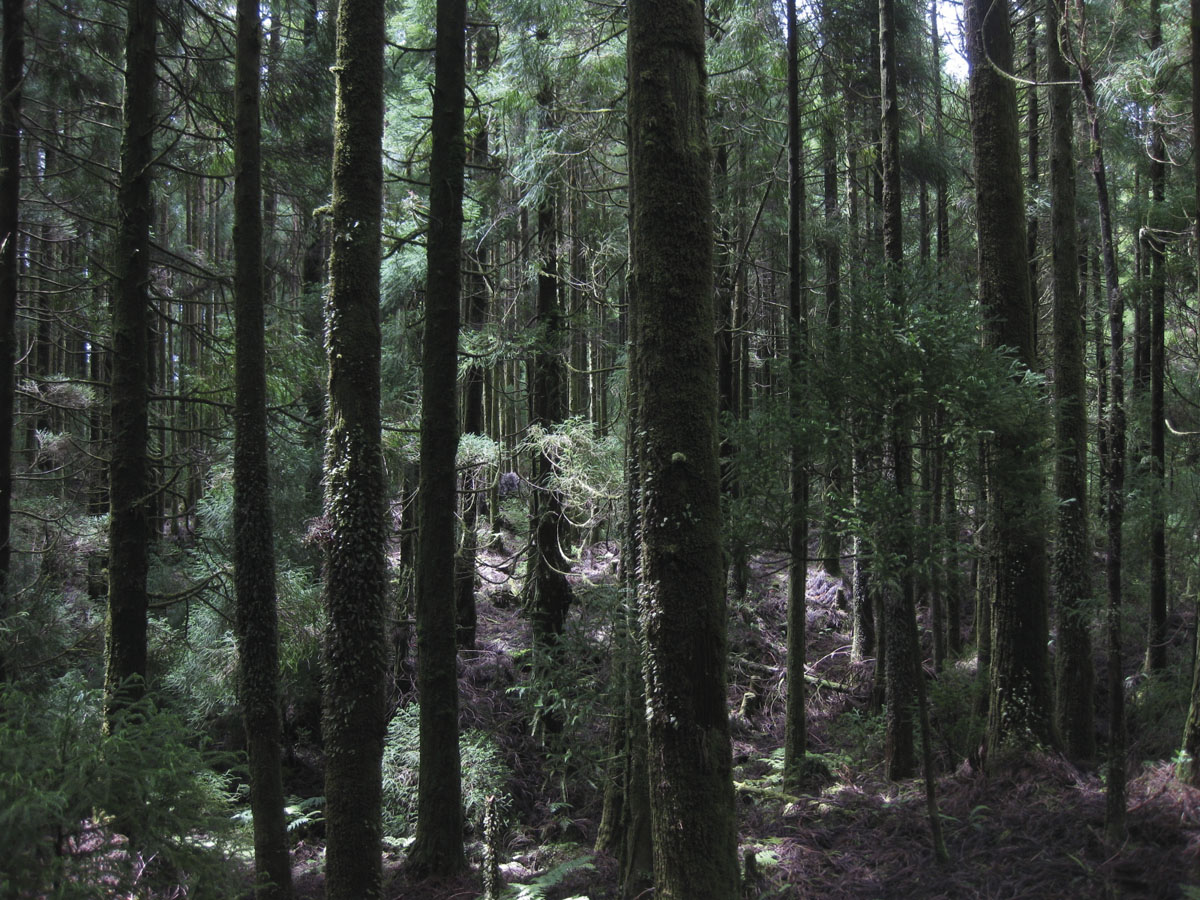 In Arboretum, Steve Peters – a US musician and composer – draws from his archive of tree-re- lated sounds that he created in New Mexico between 1988 and 2004. This sound experience, made up of real sounds that have been electronically modified, was created using the recording made inside a forest of the Sangre de Cristo Mountains - the south- ernmost range of the Rocky Mountains - in Colorado. The bodies of dead poplar trees being moved by the wind, scratching against the surviving pine trees. This work immerses the audience inside a soundscape made up of undecipherable “plant messages”, paving the way for an unknown linguistic dimension and reminding us of the constant and natural process of life and death. 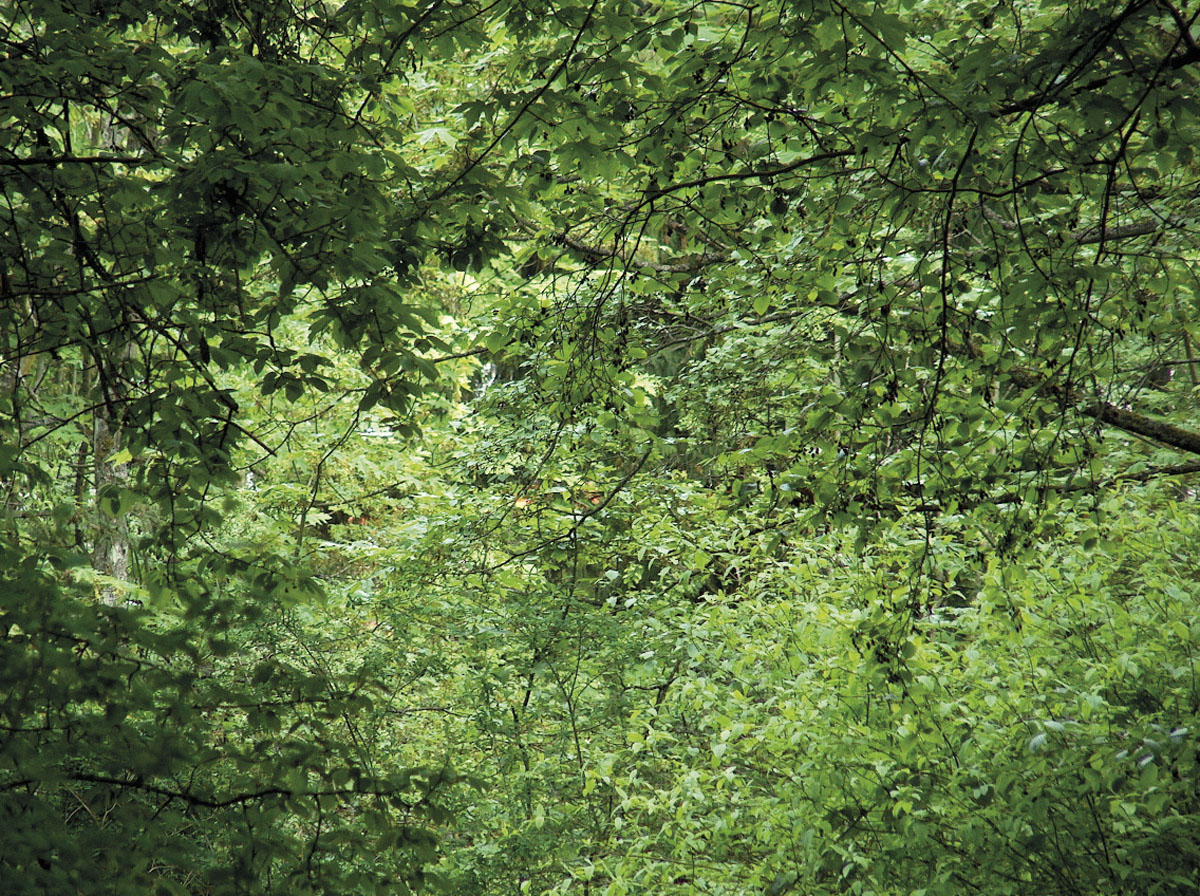 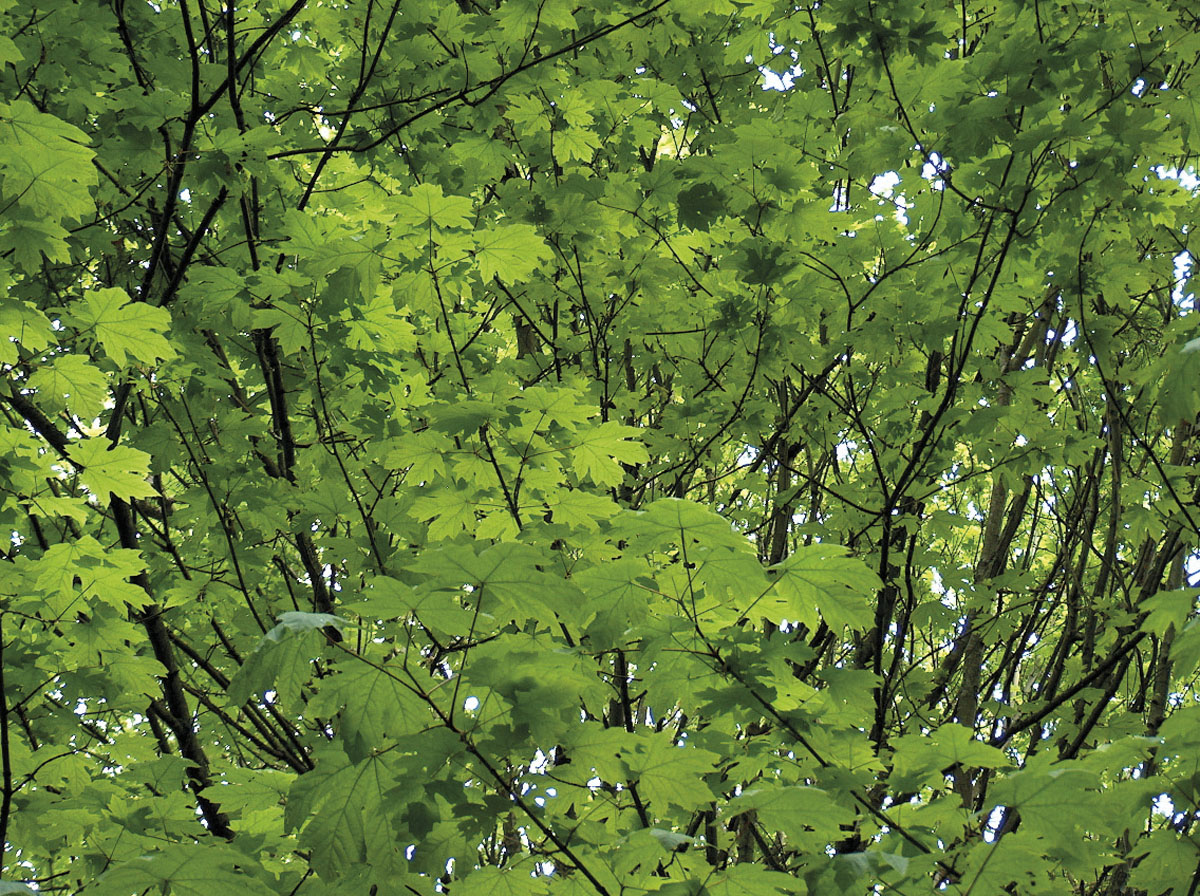 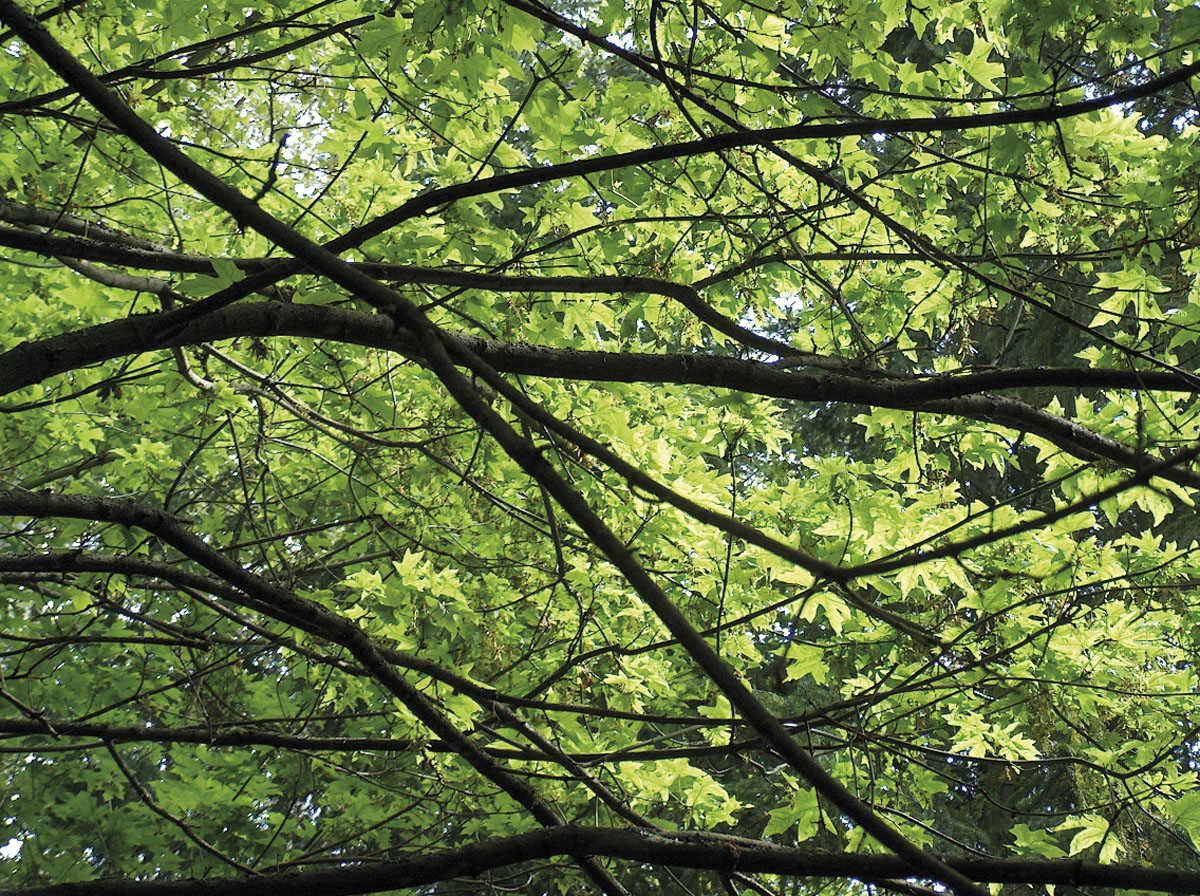 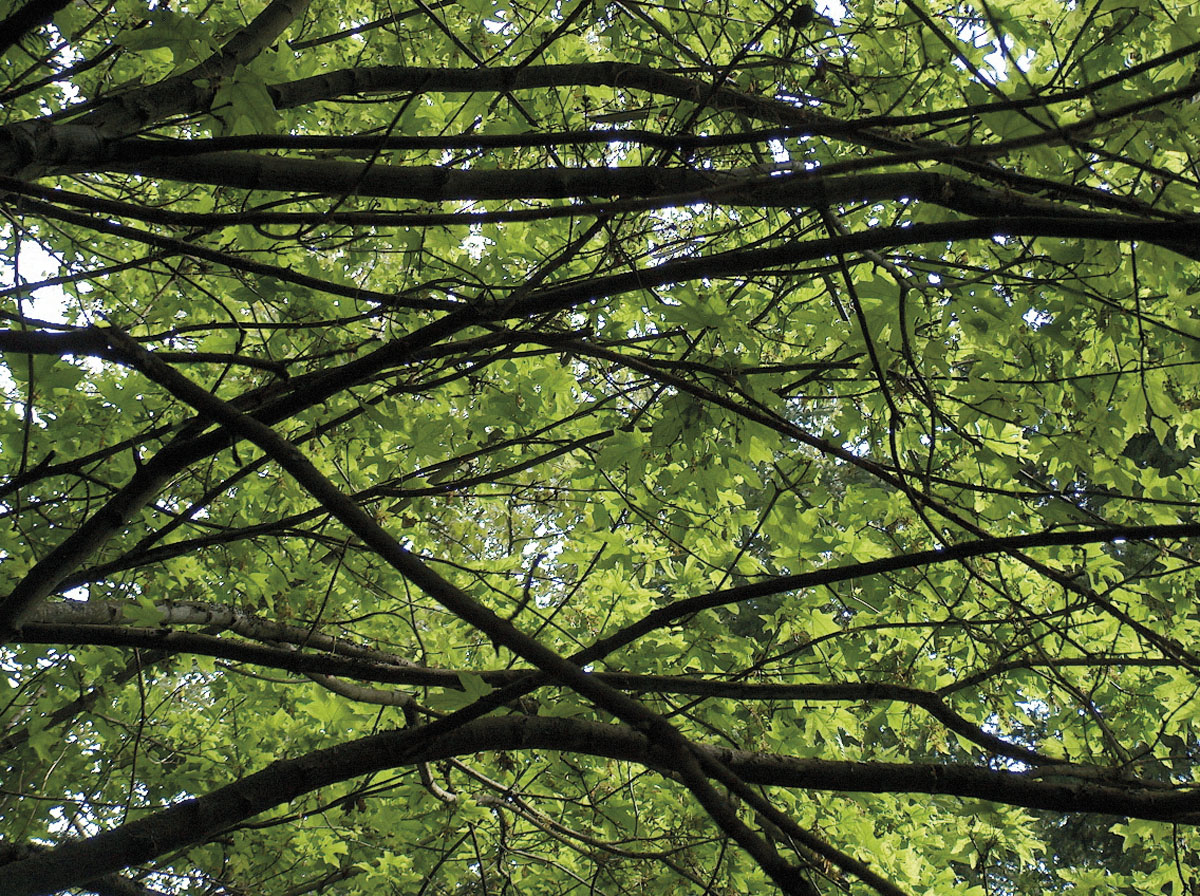 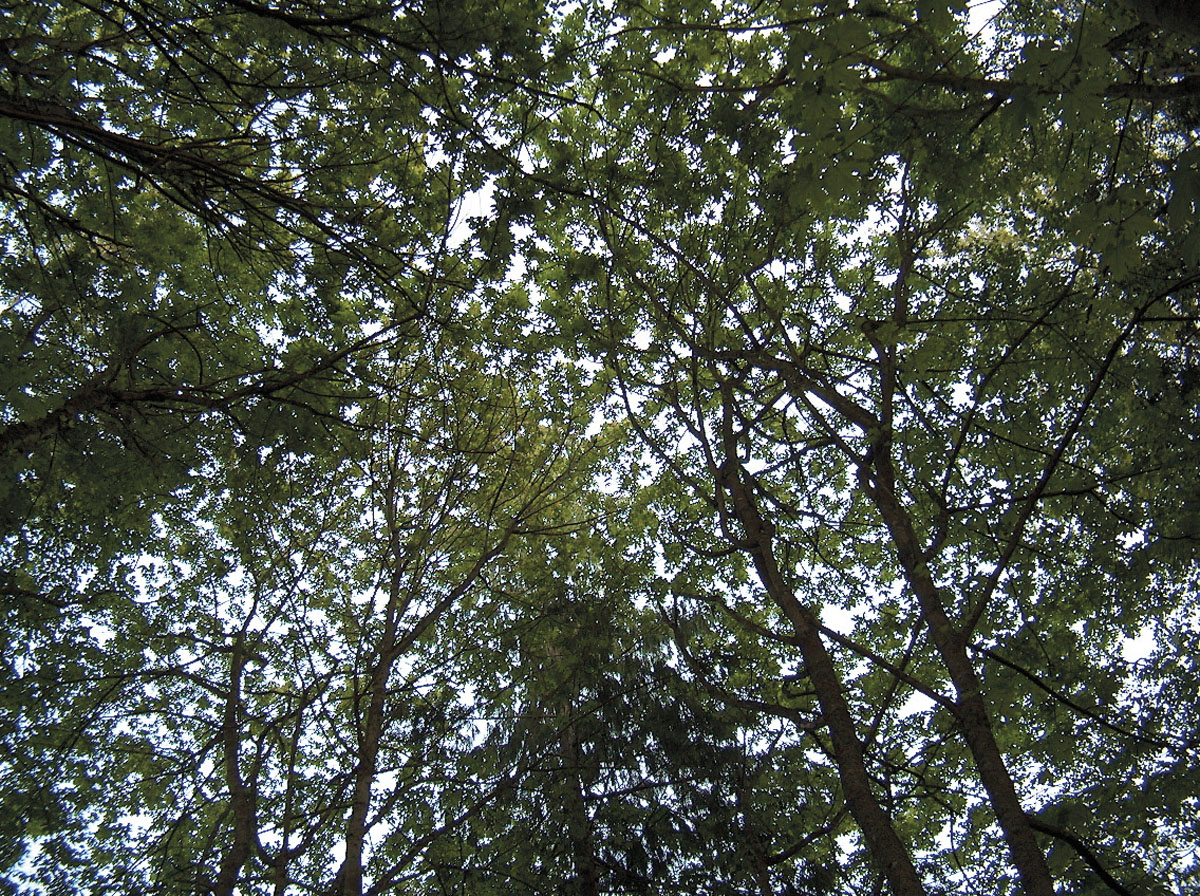 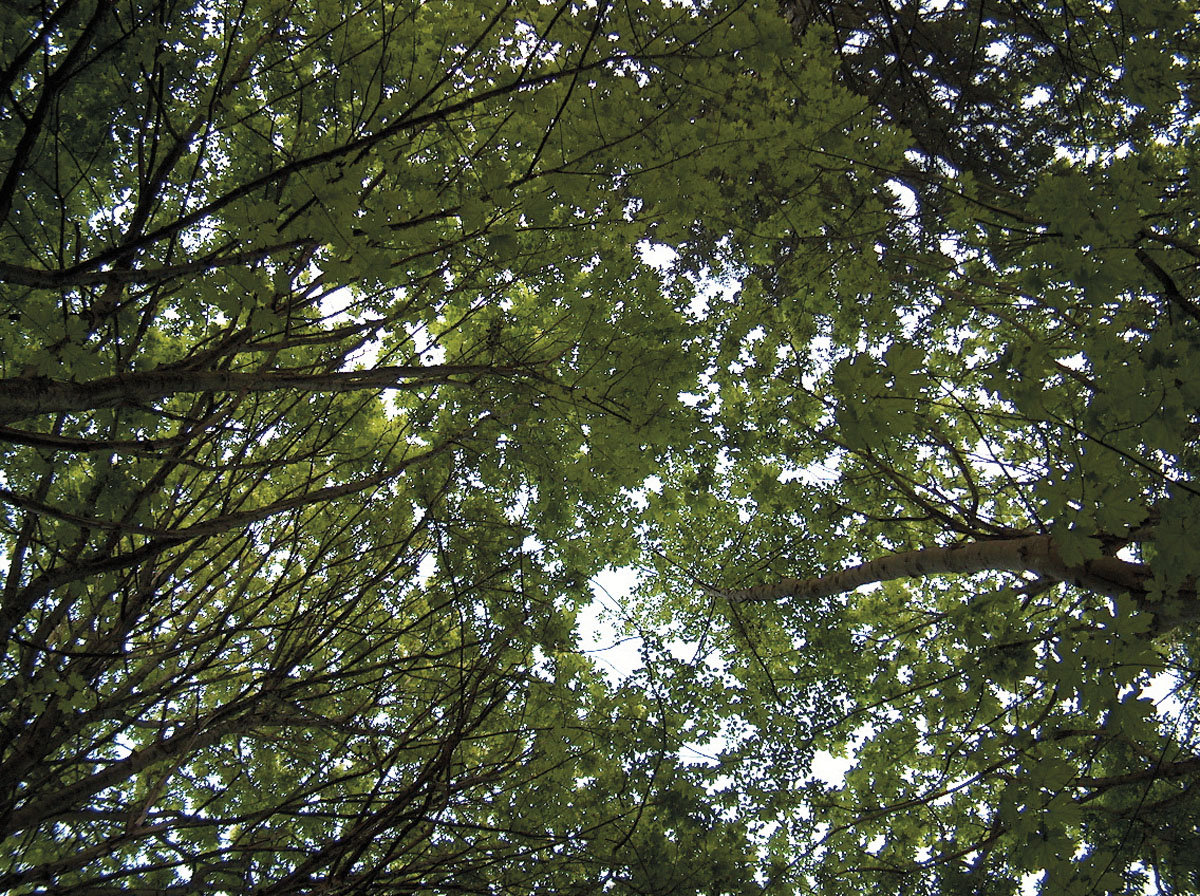 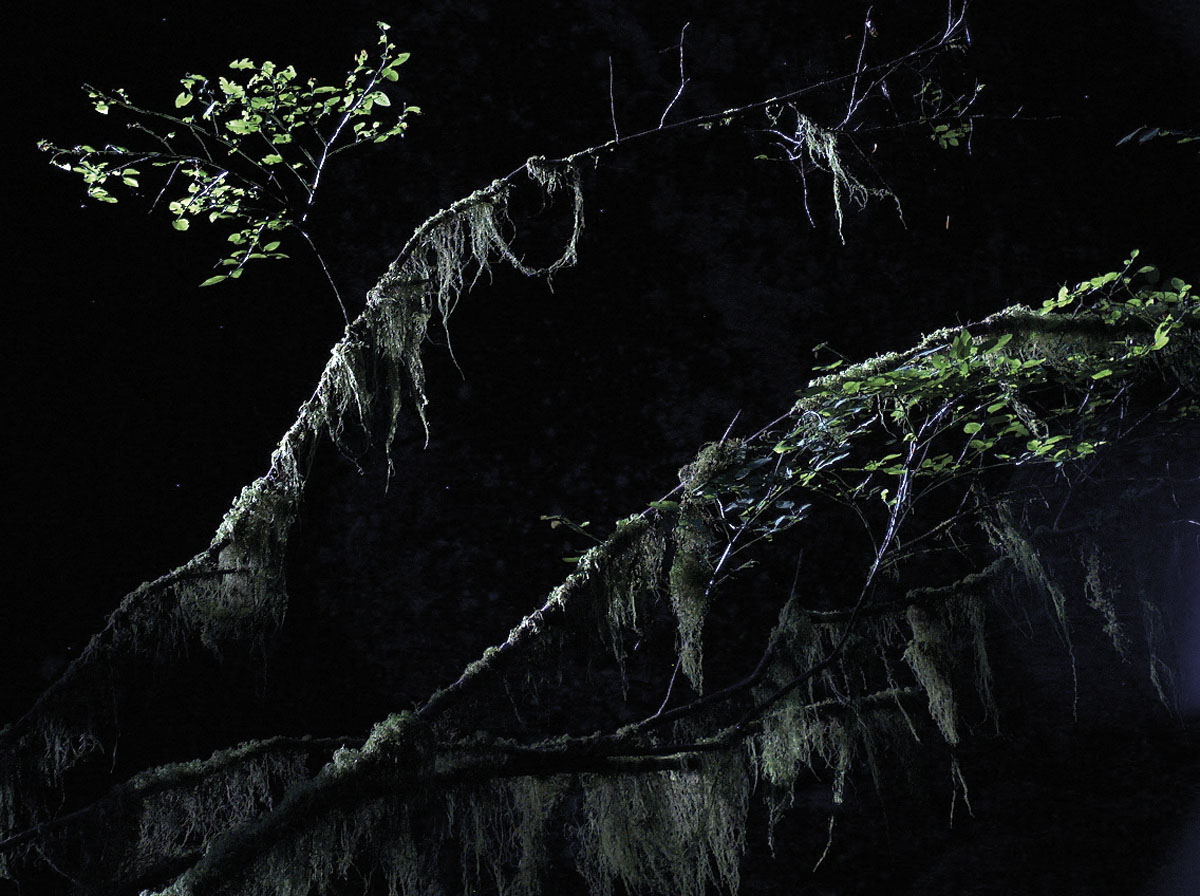 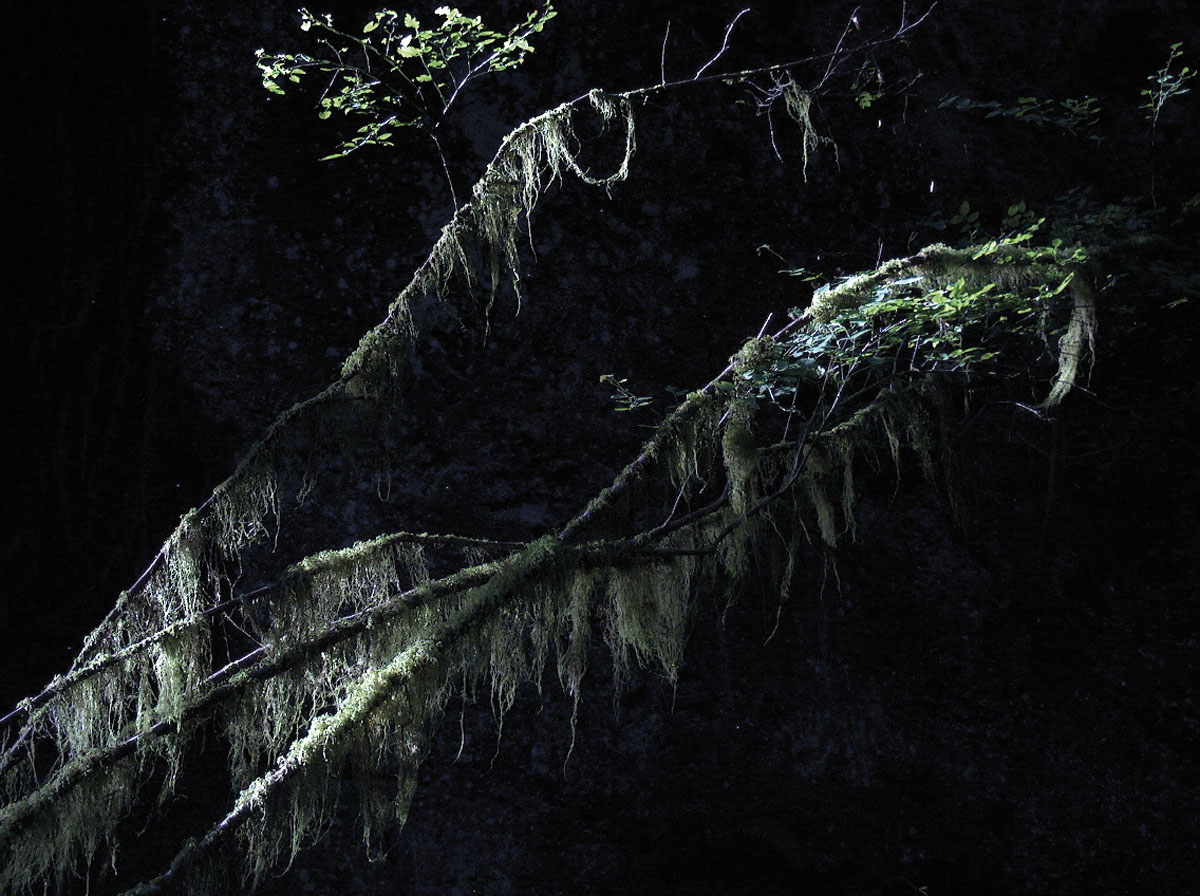 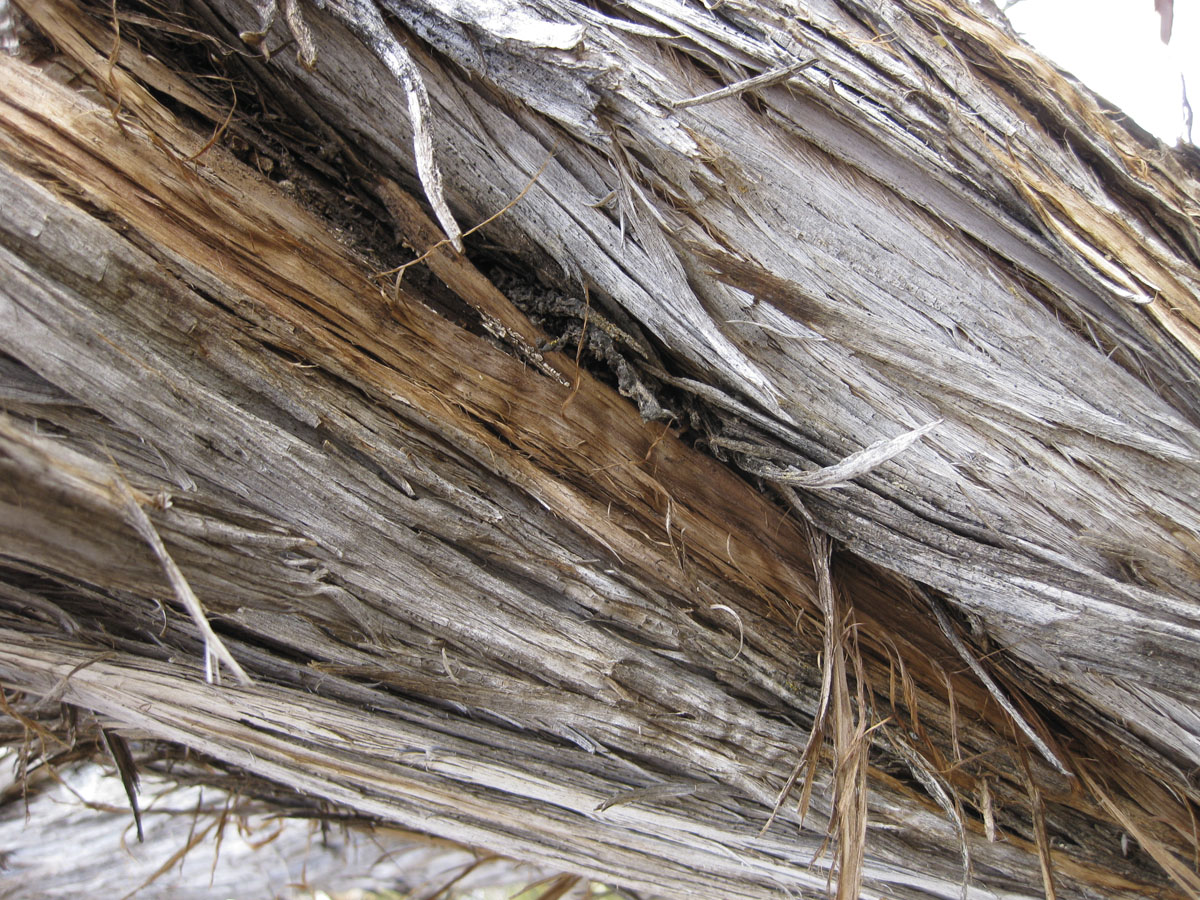 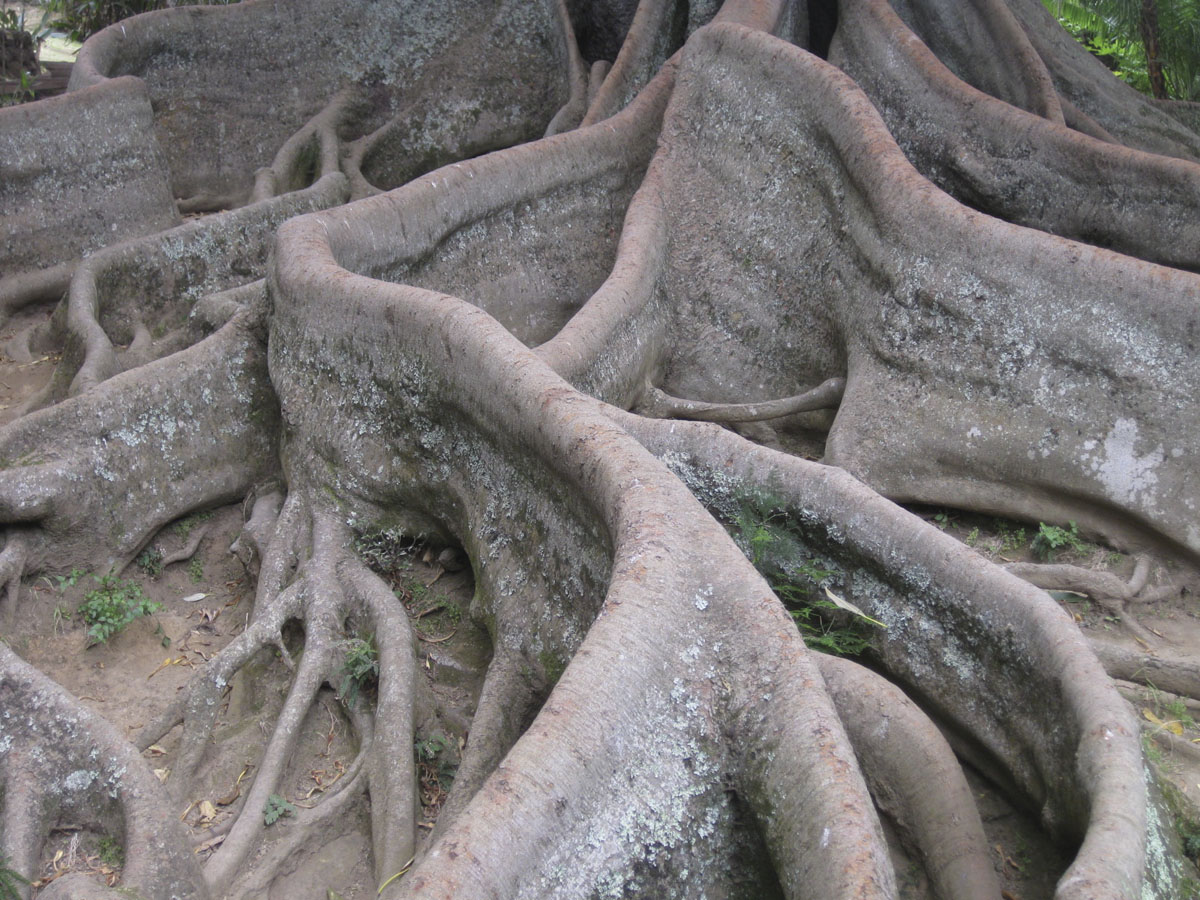 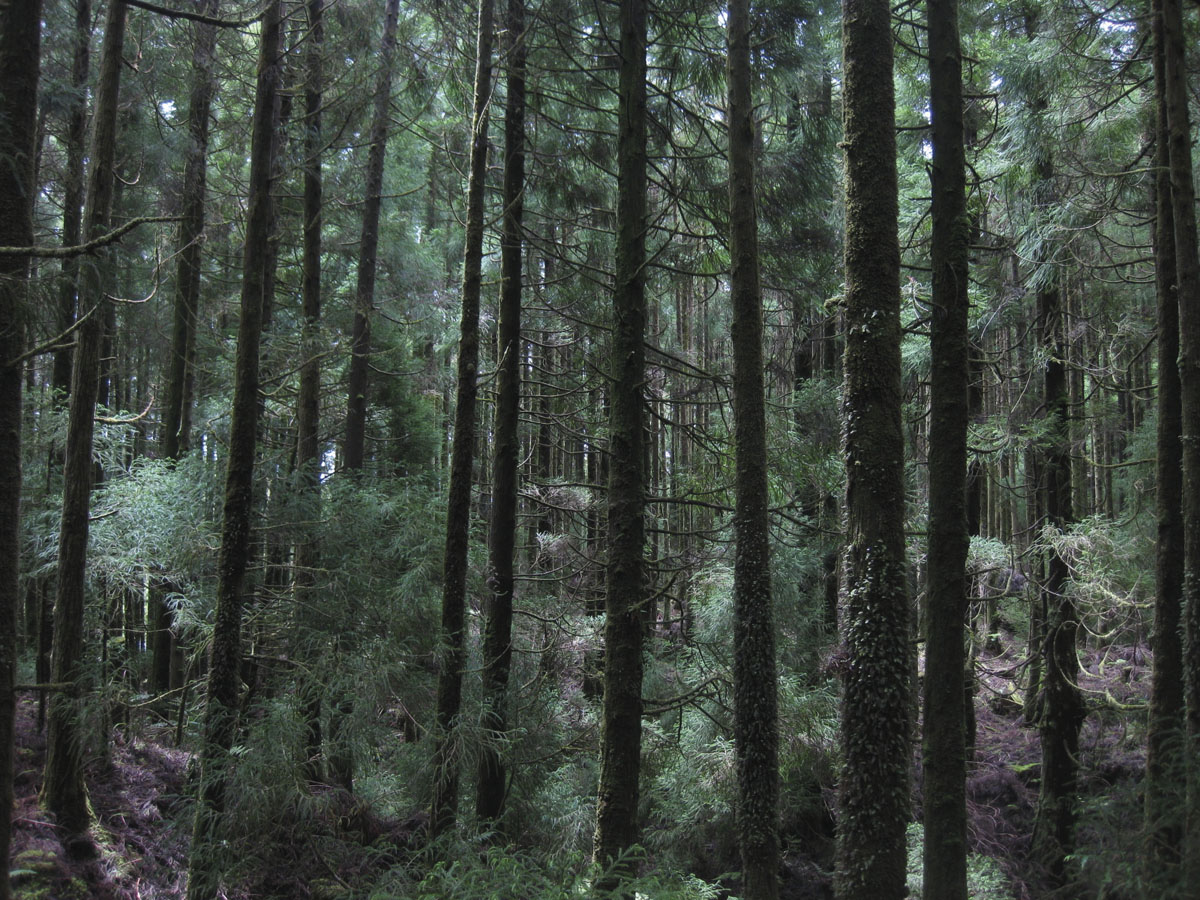 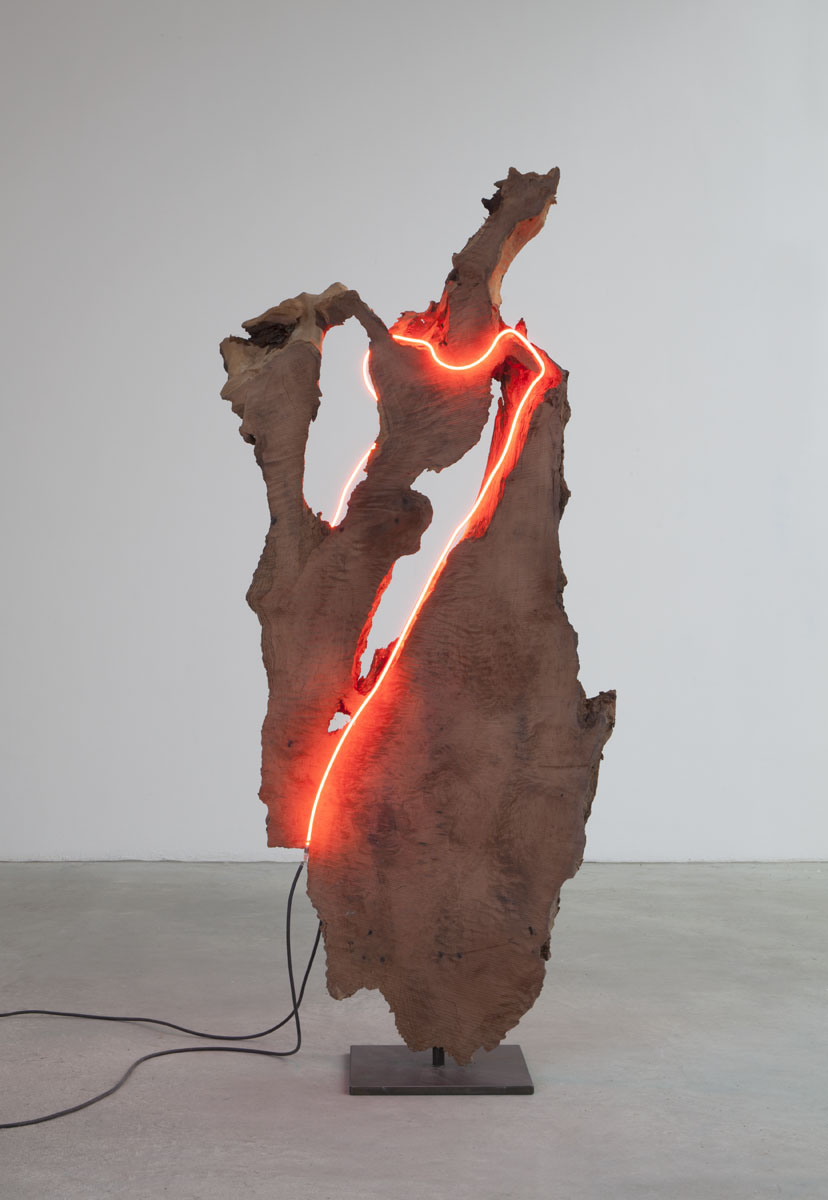 This piece is part of a series of works completed by Sam Falls between 2015 and 2017, after travelling through California’s national parks. This sculpture was made using Californian redwood, from fallen trees in the Redwood National Forest. The red neon outlines the silhouette of a person lying on the sheet of wood. This conjures up an image of two organic beings coming together, evoking a concept of blending. This work pays tribute to the natural passing of time and to the growth process spanning centuries; it also aims to follow nature’s geological beating of time in order to depict this, almost like a portrait, as an image of light and space, while touching on the vulnerable stability of natural reserves that find themselves at the mercy of frenetic Western growth mechanisms. 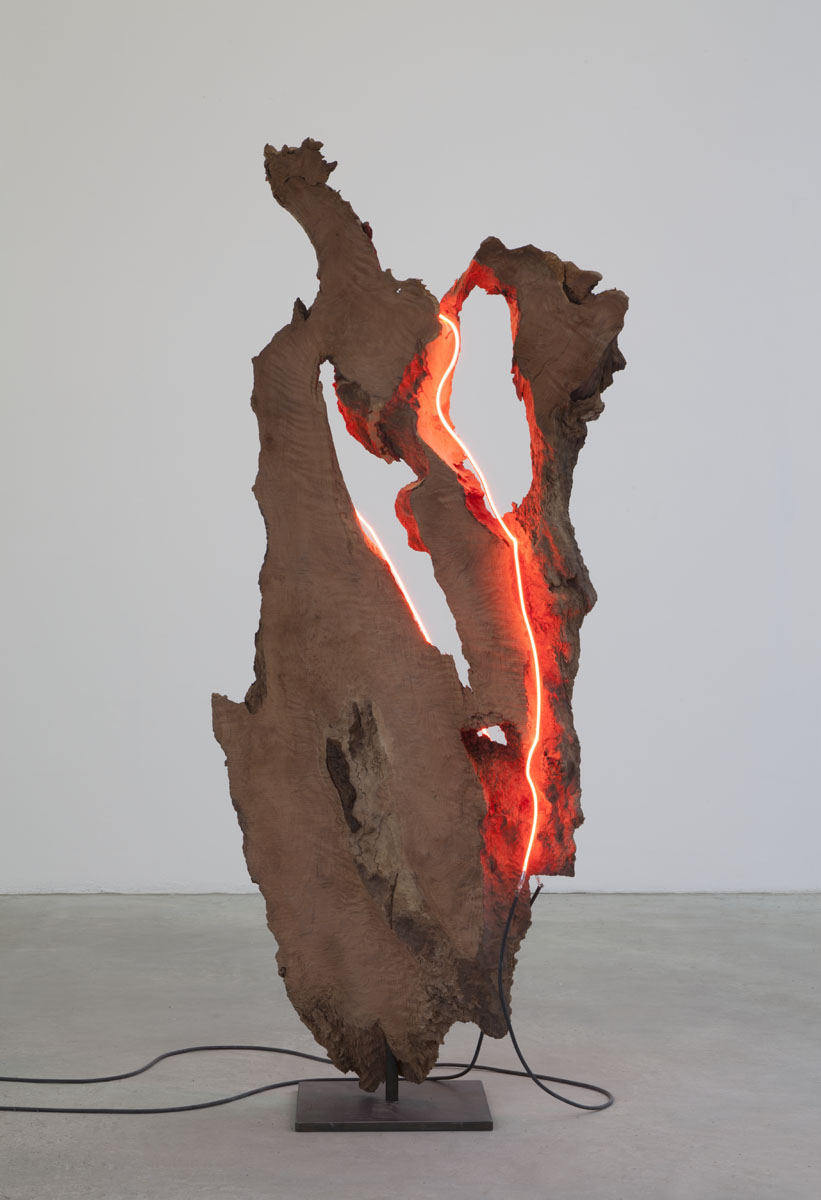 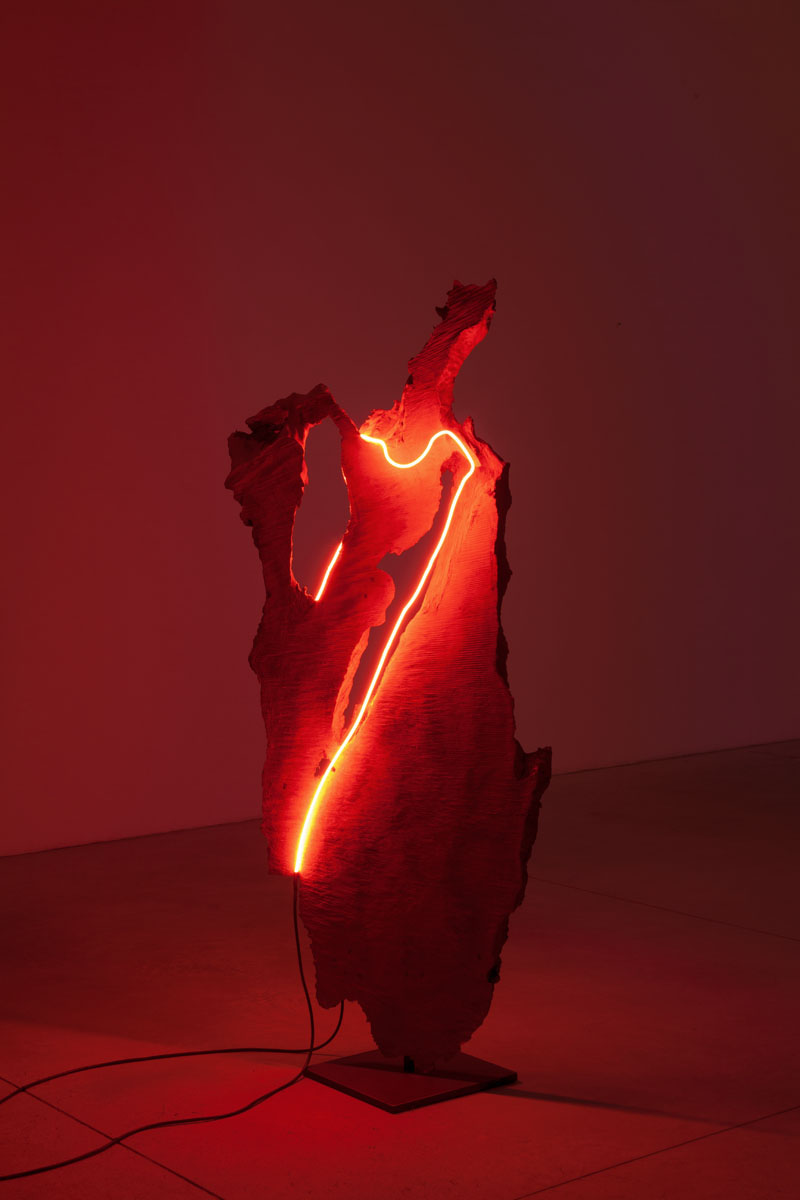 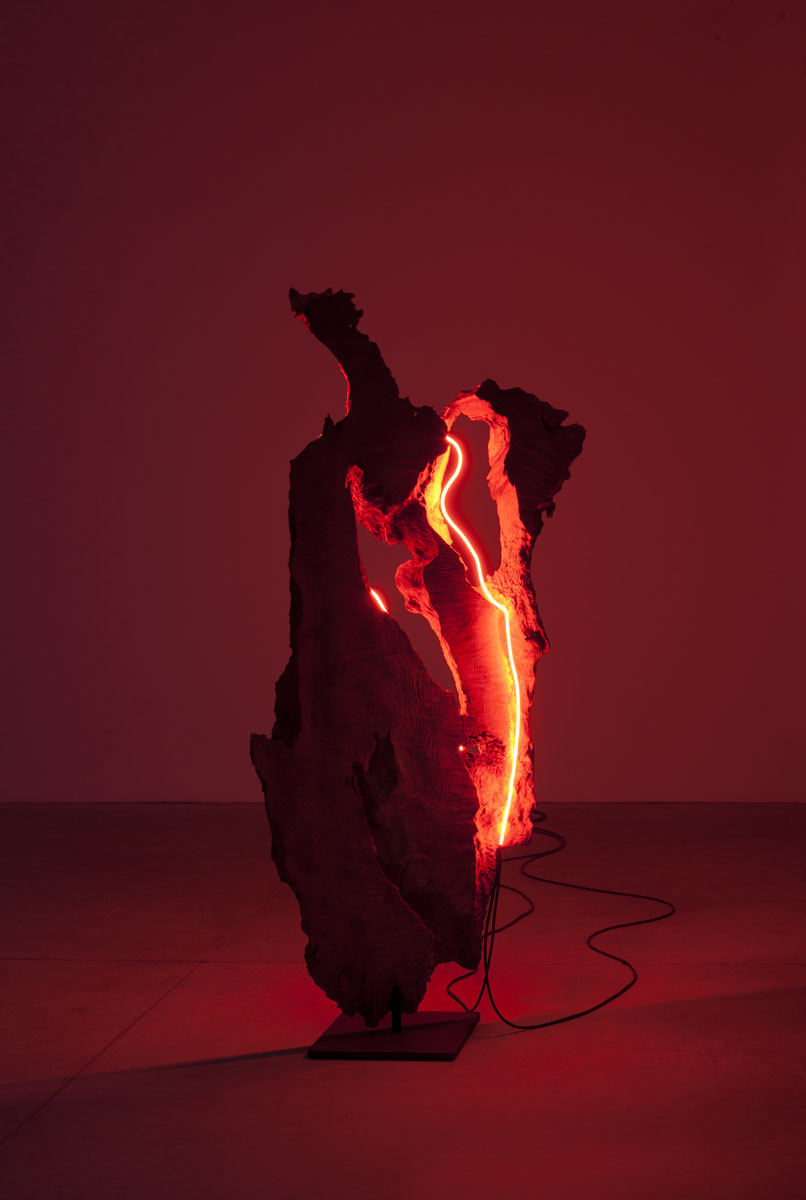 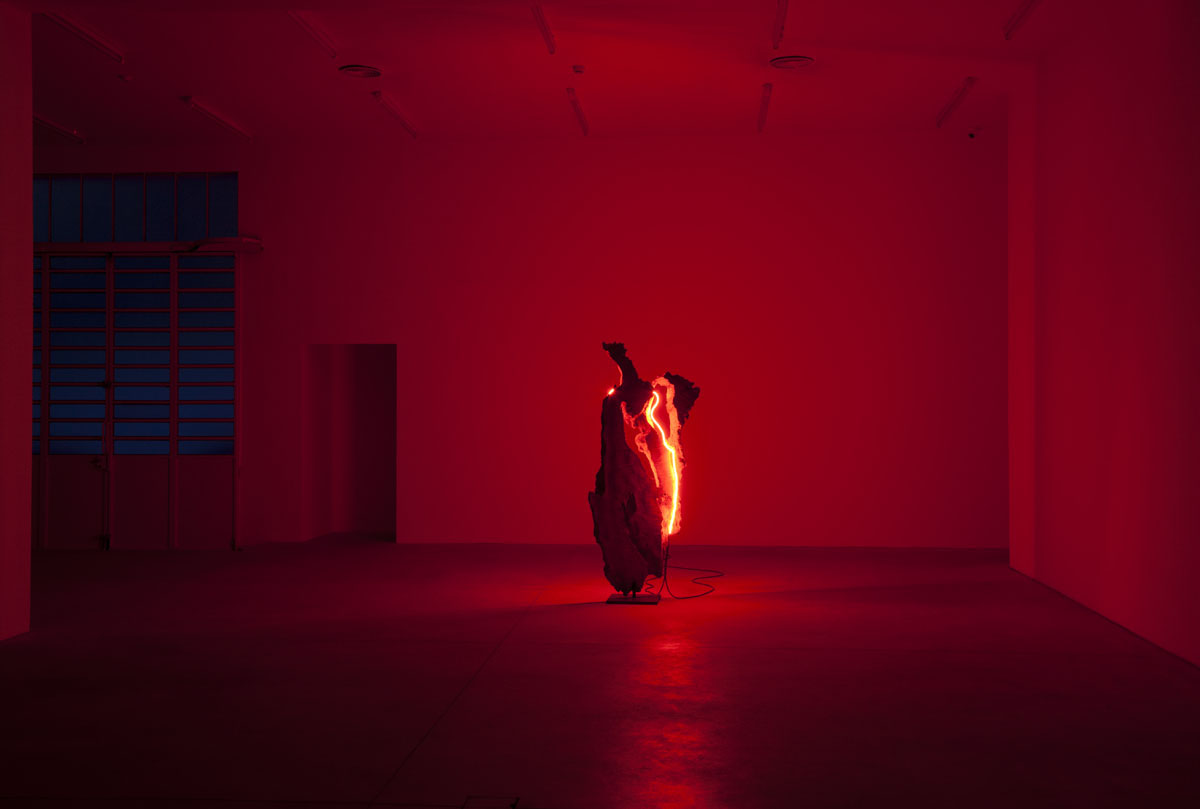 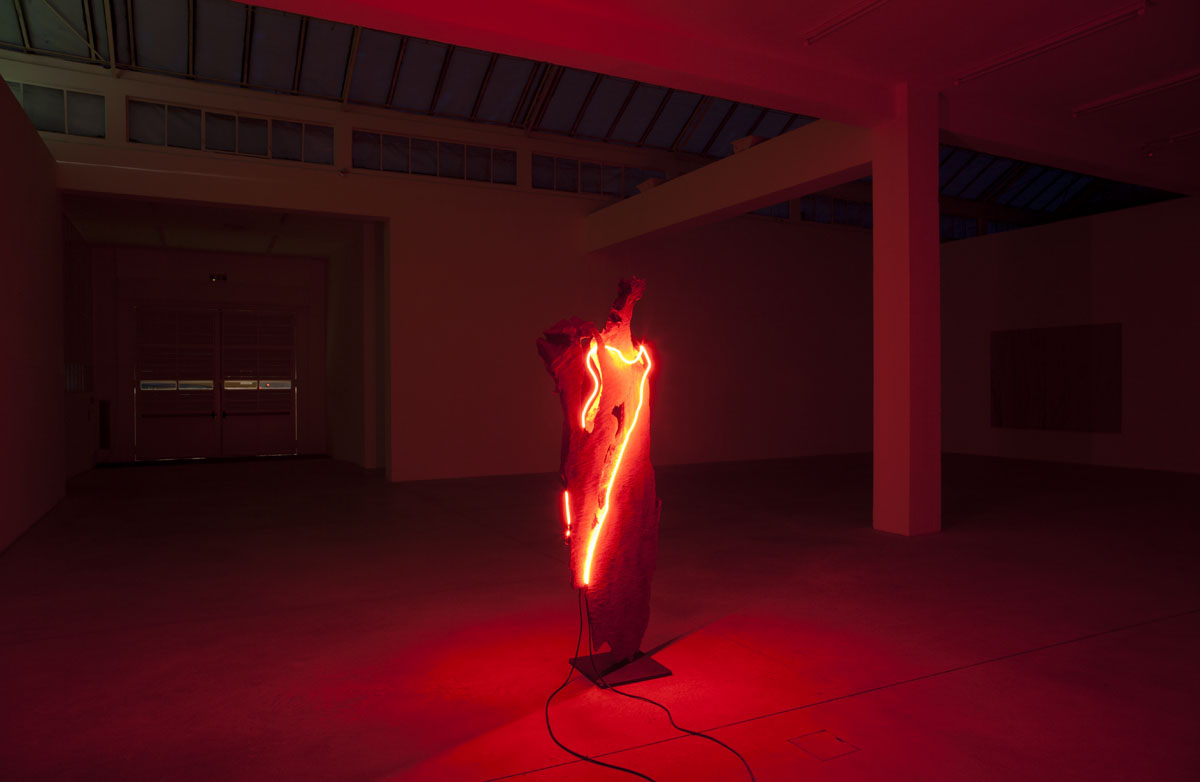 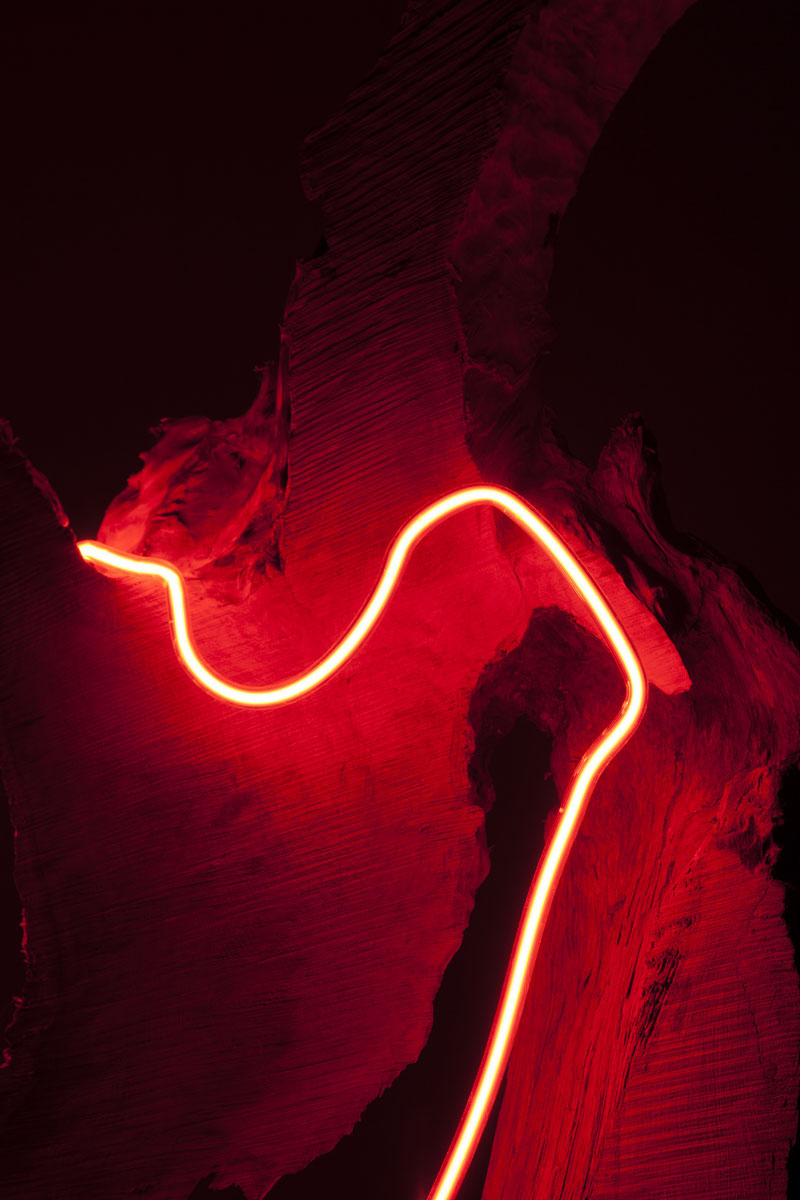 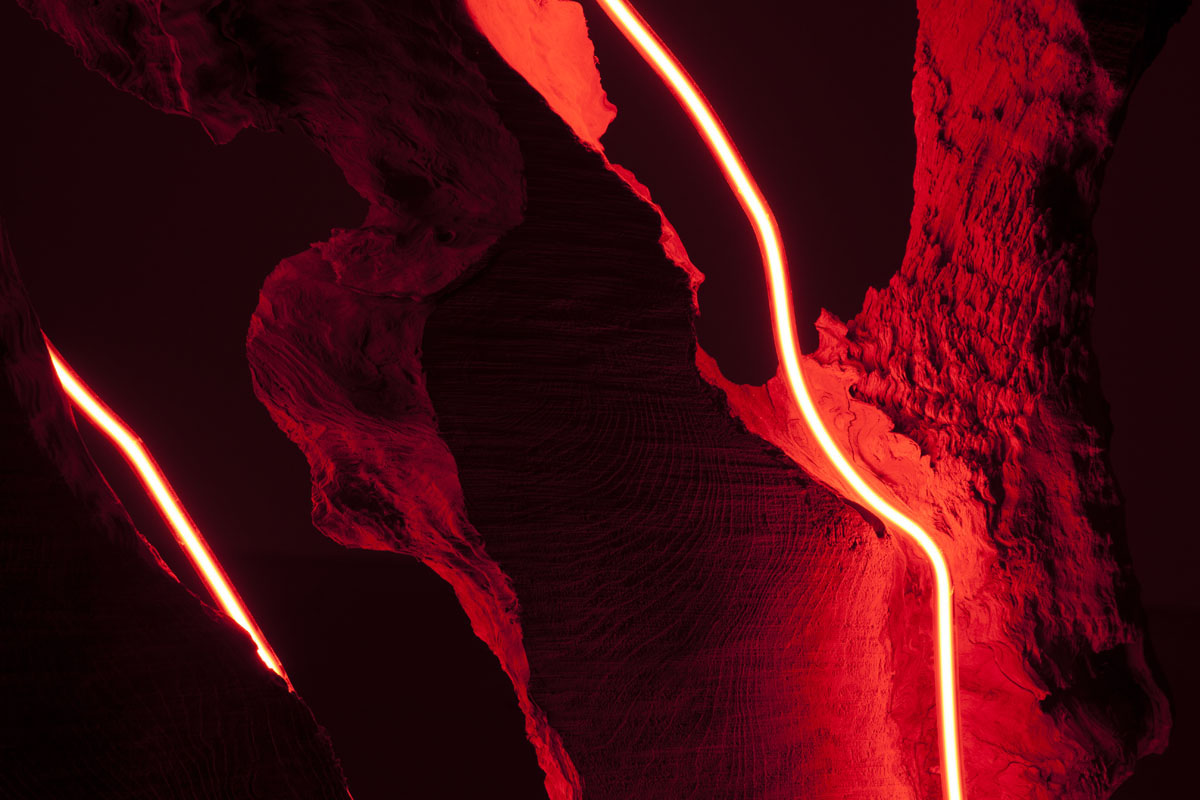 Text of the video Cambio

'Cambio' is the first of three videos by the designers Andrea Trimarchi and Simone Farresin to be featured at this exhibition and forms part of their latest research project. Their work investi- gates how the timber industry has evolved over time, asking themselves how having a different awareness of materials may lead to a more holistic approach to design. The video begins with primordial plants appearing on Earth, before we see them evolve into trees, followed by the subsequent flourishing of human life across the planet. It goes on to show the global expansion of the timber industry, the human impact and the subsequent shift towards sustainable forestry practices and environmental protection. 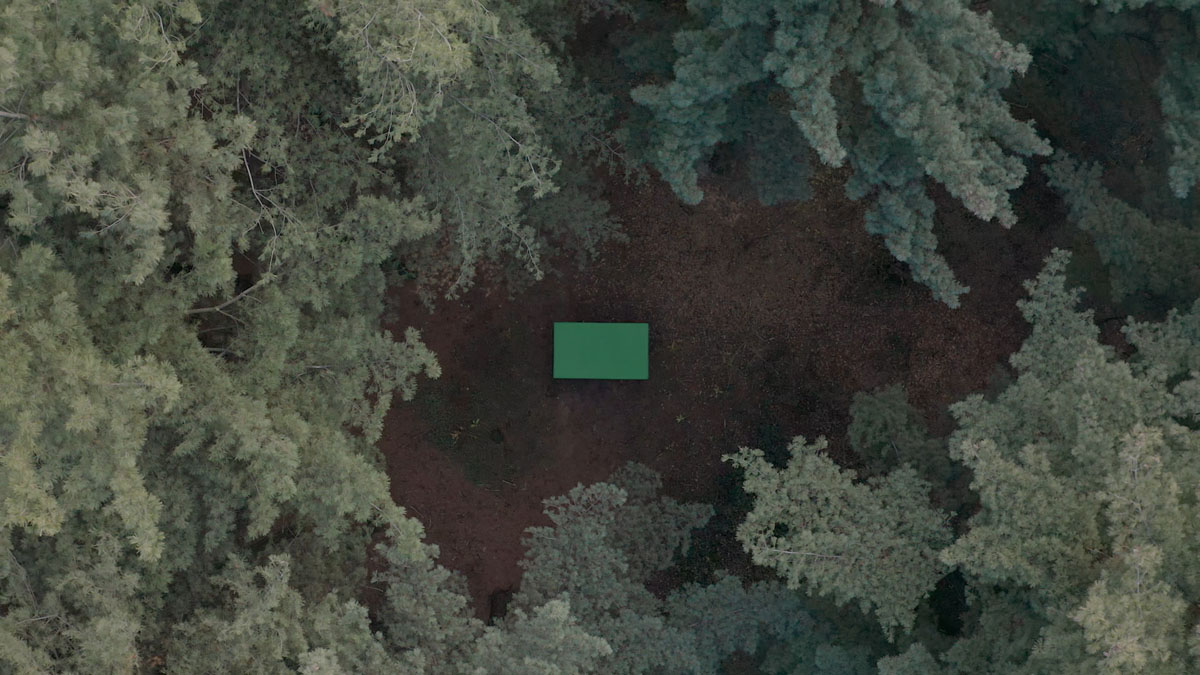 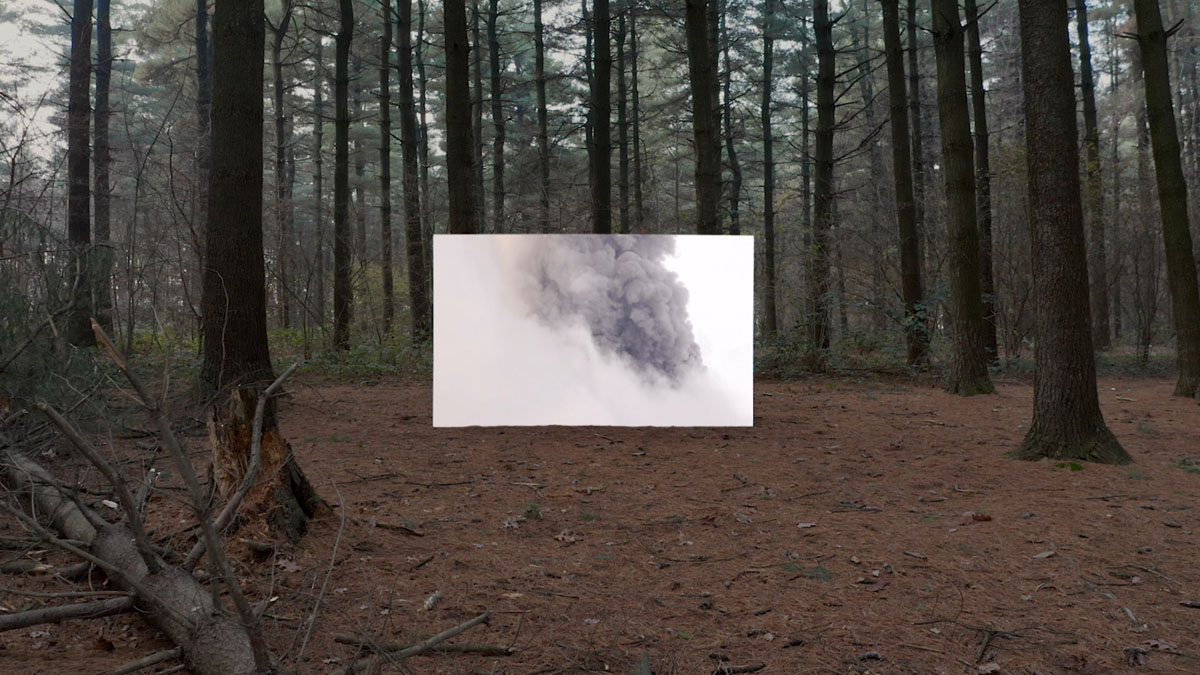 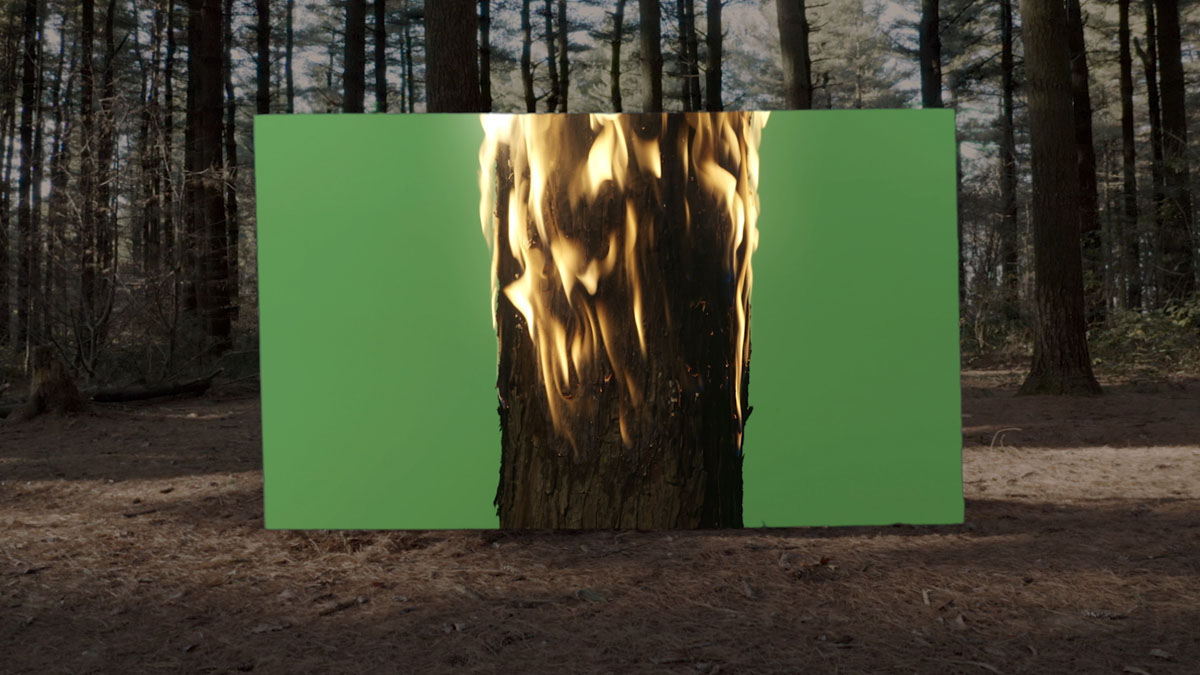 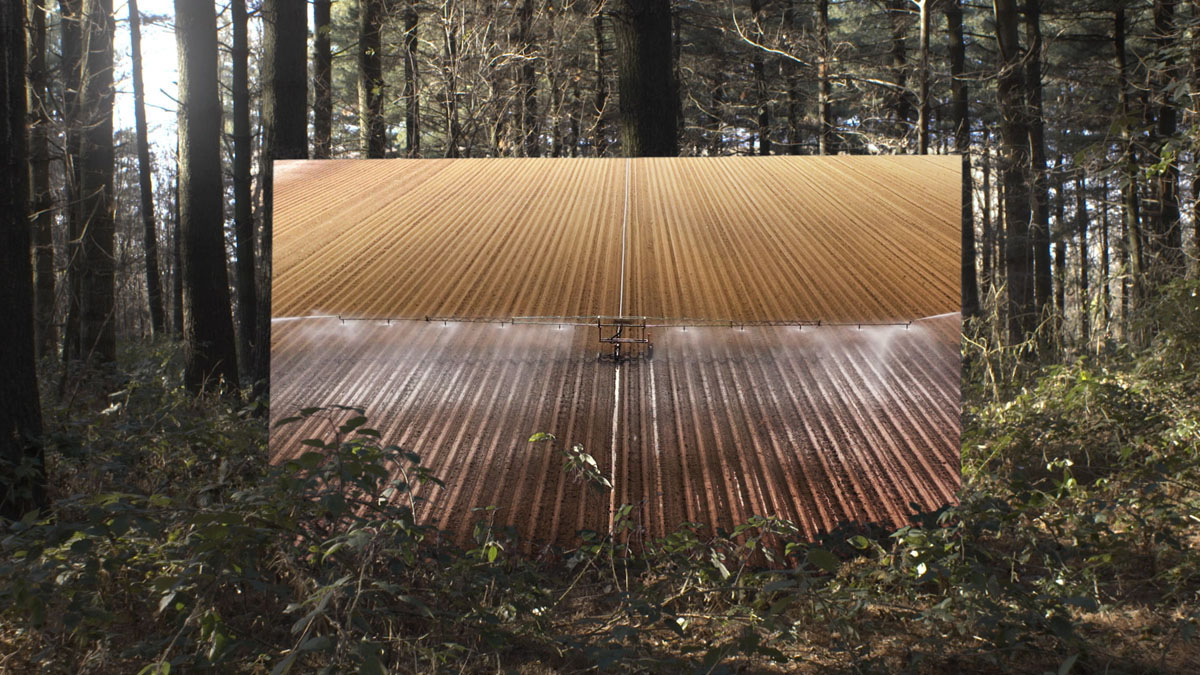 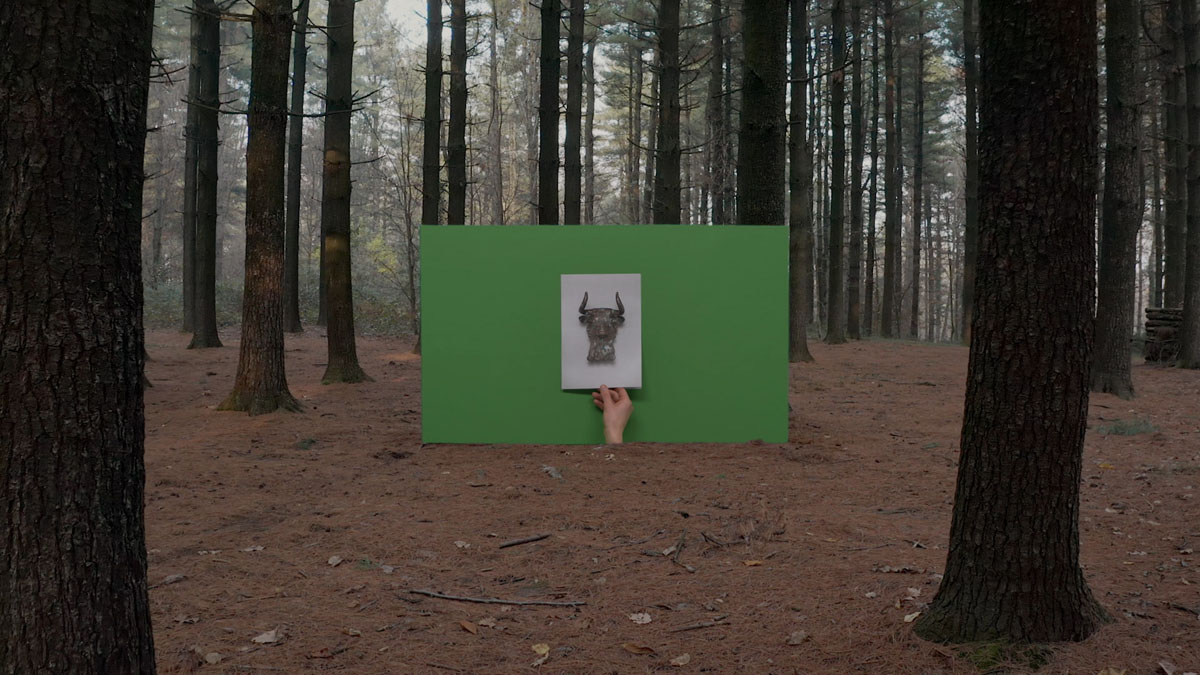 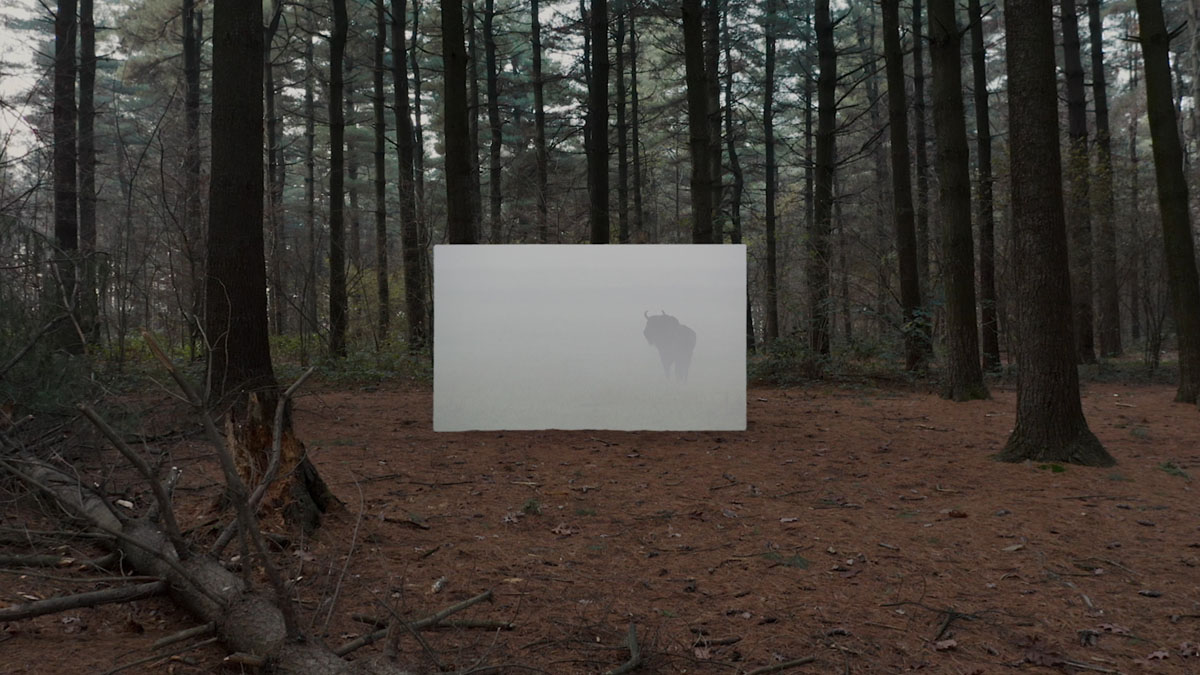